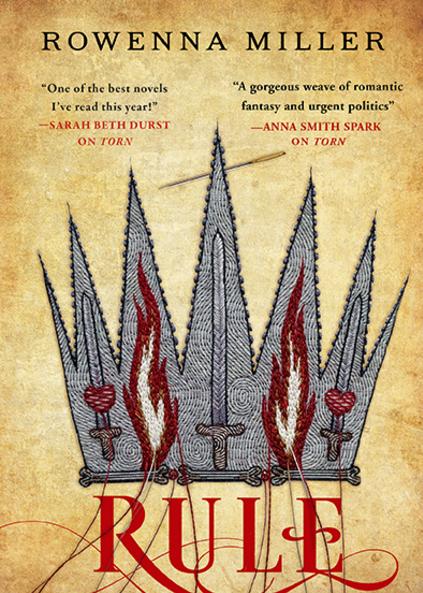 You can pre-order RULE now or add on GoodReads!

Early Reviews:
"Miller does not shy away from battle and bloodshed as the political conflict comes to a head, but also refreshingly portrays the intimate, personal impacts of sweeping social changes. Series fans will be pleased with this satisfying, sophisticated fantasy." Publisher's Weekly

"Part fantasy, part love story, and part political commentary, this series finale will tug at the mind and the heartstrings." Kirkus

"Miller’s conclusion to her French Revolution–inspired fantasy trilogy is filled with politics, ambitions, hope, and betrayal. Themes of immigration, women’s lives and rights, and democracy are woven into a delightfully intricate prose tapestry." Library Journal

In this epic conclusion to the Unraveled Kingdom trilogy that began with Torn and Fray, the magical seamstress Sophie Balstrade joins forces with her brother the revolutionary leader and her betrothed the Crown Prince in a deadly bid to change history.

The civil war that the charm caster Sophie and the Crown Prince Theodor tried so desperately to avert has come to Galitha.
While Theodor joins Sophie's brother and his Reformist comrades in battle, hoping to turn the tide against the better-supplied and better-trained Royalist army, Sophie leverages the only weapon she has: charm and curse casting. She weaves her signature magic into uniforms and supplies procured with the aid of unlikely foreign allies, but soon discovers that the challenges of a full-scale war are far greater than the entrepreneurial concerns of her small Galithan dress shop.

The fractured leadership of the Reformist army must coalesce, the people of Galitha unite against enormous odds, and Sophie create more than a little magical luck, in order to have a chance of victory.